Living conditions in the Late Medieval and Modern Period Main City in Gdańsk can be reconstructed by studying its material culture. For this reason, archaeologists from the University of Warsaw will analyse and publish results of archaeological and architectural investigation conducted in Powroźnicza Street. So far it has been one of the biggest explored areas, and it is situated almost in the centre of the old town.

Archaeological research was conducted in 2002-2004 and an area of approx. 2500 m2, consisting of 12 former urban plots, was explored at that time. The excavated area was situated at the back of five plots in Długi Targ Street and in seven plots in Powroźnicza Street. As a result, we collected data for reconstruction of settlement phases in the Main City, situated on the bank of the Motława River. The preliminary results, published soon after the completion of the excavations, have been the only report available so far. 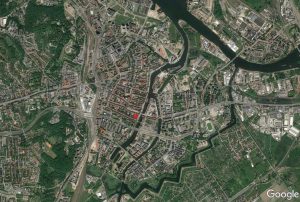 In the context of archaeological studies it has been established that the activity associated with the drainage and adaptation of the land for settlement purposes was undertaken as early as in the 1330s. The next two decades brought progress in the process of subdivision and gradual development of these plots. Brick structures were gradually introduced in the 15th century and they replaced the older wooden ones, but some of the latter survived and were unearthed during exploration.

Exploration of the fills of 30 latrines at the back of the properties resulted in particularly numerous discoveries – a total number of approx. 50000 finds were recovered. Such a big group of artefacts found over the considerable surface area helps to answer key questions regarding living conditions in the Late Medieval Hanseatic city, as well as its development and use of the urban land.

Online publication of the discoveries

Thanks to support of the National Institute of Cultural Heritage complete results of this research will soon be shared as a scientific publication and catalogue containing very informative images of the most interesting objects. It will be released at the beginning of 2022. It features nearly 700 selected artefacts and includes extensive commentaries, which reflect the main results of the study. The catalogue will be shared online as an open access document. The full description of the results will be published as a monograph book at the end of 2022. History of settlement activity in the area, based on the analysis of written sources, will be the starting point of the publication. The main part of the monograph will present the analysis of the stratigraphy and relative chronology of the explored layers. This will serve as the basis to identify settlement phases in the area and their associated architectural remains. As a consequence, it will be possible to characterize the development of the area and expansion of construction activity in this part of the city from the 1330s to the mid-20th century.

The key element of this project is a description of selected categories of portable artefacts, e.g., pottery vessels and stove tiles, artefacts made of wood, metals, glass, leather, textiles and other raw materials. Identification of a hoard of mid-15th century coins, found in a recess in the wall of one of the houses, will be another part of this volume. Diet in medieval Gdańsk will be reconstructed on the basis of animal bone remains.

Living conditions in a Hanseatic city in the Late Middle Ages

The results of this archaeological study will deliver new, important and unique data for research on the standard of living in the Baltic coast metropolis in the Late Middle Ages and in the Modern Period. A lot of information about artefacts reflecting the living conditions and material culture in a Hanseatic city will be added to the internationally recognized body of knowledge. Thus the planned study does not refer only to local or regional contexts. The publication will also add essential data for research on the material culture of the Baltic Sea region, and in this way contribute to comparative studies.

The project entitled “Building quarter Długi Targ-Powroźnicza-Ogarna Streets in Gdańsk. Analysis and publication of results of archaeological work” is conducted as part of the programme “Protection of archaeological monuments”, implemented by Varia Foundation of Humanities of the University of Warsaw, in cooperation with the Faculty of Archaeology o the University of Warsaw. The projects is co-funded by the Ministry of Culture and National Heritage with funds from the Fund for Promotion of Culture.

This article may be freely reprinted with photographs, with reference to the source

Michał Starski – the principal investigator of the project, archaeologist, employee of the Faculty of Archaeology of the University of Warsaw. He focuses on archaeology of the Late Middle Ages and Modern Period in the Polish territory, including urban settlements and description of material culture in this time span. He specializes in research on pottery and ceramic artefacts. He conducts excavations at sites in Puck and Człuchów, and participated in the work in Powroźnicza Street in Gdańsk.