Expedition from the Faculty of Archaeology of the University of Warsaw, headed by Professor Bartosz Kontny, conducted underwater archaeological exploration in Lake Hammersø from 6th to 13th September 2021. This work was a continuation of exploration of the biggest glacial lake on Bornholm. The season of 2021 brought a discovery of another group of medieval artefacts. Fragments of weapons from Lake Hammersø are particularly interesting items.

The underwater research on Bornholm has continued for three years. After selection of the area for exploration, the archaeologists use e.g. sonars and metal detectors. In the previous seasons the researchers found a big late medieval spearhead with lugs and, which is rare, with intact battens, as well as a few heads of crossbow bolts with preserved fragments of wooden shafts. The latest season brought the discovery of more fragments of weapons in Lake Hammersø: another bolt point (altogether we have five specimens now), an arrowhead of bodkin type (with a robust blade) and possibly a point of pole weapon. Apart from that, we recovered an iron axe. All these artefacts could be dated to the Middle Ages, and they fit in the context of the discoveries made in previous years. Most of the specimens were found in the northern part of the lake. Does that mean they were relics of a battle on the shore? Or perhaps of hunting? The increasing number of medieval “lake” weapons, mostly from the Early Middle Ages, but also from the Late Middle Ages and Early Modern period, seem to indicate that practices of magic, associated with deposition of weapons in water, had survived from the pagan times (definitely on a limited scale). This could explain the presence of an isolated spearhead at the opposite end of the lake, without other objects from that period. The nature of the discoveries of the remains of weapons from Hammersø can only be elucidated by further exploration and full archaeological survey of the lake. 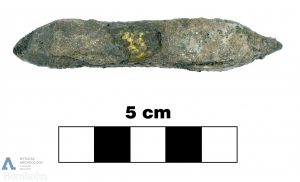 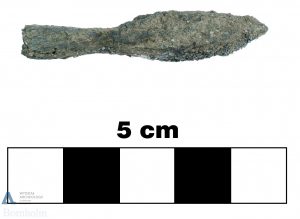 Apart from valuable medieval relics, modern objects are the main items found during exploration. The biggest ones include two wrecked boats, most likely from the late 19th or early 20th century. However, lots of signals are detected, particularly close to the shore, where human activity was most intense. The sound of the metal detector raises hopes which are gradually disappointed when it turns out again that the expected artefact is an empty beer can, a spinner, fishing hook, or a bike spoke. And we must remember that the detection and lifting of the object from the bottom often takes more than ten minutes…

Evidence for the exploitation the granite quarry adjacent to the lake is also frequently found (the quarry closed in 1970 and Lake Opalsø, a quarry lake, is its relic). In the last season we found metal rods hammered into the rock, steel ropes, metal cutters and hammers.

The latest season brought an interesting discovery of a contemporary object, a wedding ring with an engraved inscription: “Doris 17 2 67”, indicating the name of the owner and the wedding date. Who were Doris and her husband? How was the ring lost? Was it really lost? Presentation of this discovery on local TV led to a bit of a media feeding frenzy. There have been some attempts at finding the dramatis personae, so we might learn the more details soon.

The well-preserved artefacts from the site motivate us to continue exploration in the following seasons. The area of the sandy plateau in the northern portion of the lake definitely has more interesting artefacts to offer and we will try to steal more secrets from there.

This article may be freely reprinted with photographs, with reference to the source

Bartosz Kontny – the dean of the Faculty of Archaeology of the University of Warsaw. His research focuses on the pre-Roman and Roman Period, as well as the Migration Period in barbarian Europe. He is an expert on ancient weapons and boat building, and has been involved in underwater archaeological exploration for many years.

Franciszek Komorowski – a student of archaeology at the University of Warsaw. He is learning methods of underwater archaeological exploration. His research interests include the Late Middle Ages and the Modern Period.

The following articles regarding the research on Bornholm have been published online: