A Facebook post published on the 16th of July described an unusual find in Biłgoraj county in eastern Poland. In the 2nd half of 2020, a very fragmented and destroyed pottery vessel, found in the attic, was delivered to the Biłgoraj Region Museum. After the initial analysis, this pottery artifact was identified as the product of the Peruvian Chimú culture, a strange find indeed. The vessel has a characteristic incised and anthropomorphic decoration as well as an iconic form of the stirrup spout bottle. The dark color of the surface is the result of low oxygen reduction atmosphere in which the pot has been fired.

Unusual discovery of a Peruvian vessel

The story behind the discovery itself is stunning and noteworthy. The artifact was donated to the museum by a descendant of a Polish post office worker. The ceramic vessel fragments were resting in an unclaimed mail package, which had been sent before the beginning of the Second World War. The outbreak of the war prevented the delivery of the package and the artifact remained forgotten in the attic of a house in Biłgoraj county, eastern Poland. This piece of information has been provided by Mr. Konrad Grochecki, the archaeology specialist of the Museum of Biłgoraj land, who reconstructed and identified the artifact as a product of  a Precolumbian Andean culture.

Currently, the Chimú vessel is presented in the museum as a part of the permanent exhibition. 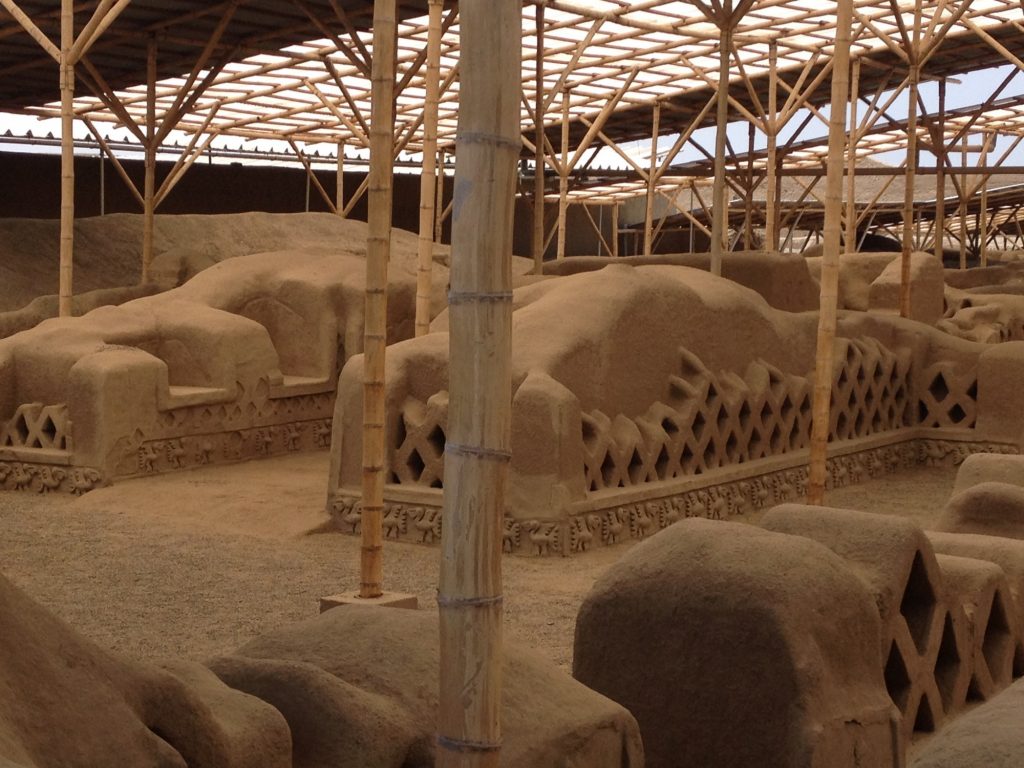 Interior of the palace complex of Chan-Chan©  J.M.Chyla under CC BY 4.0 licence

Chimú culture developed during the Late Intermediate Period (ca. 1000-1450 AD) at the northern coast of Peru. The capital of the Empire Chan Chan is located in the Moche river valley, currently in the suburbs of the town of Trujillo. Researchers indicate visible inspirations in Chimú art coming  from Moche culture iconography . Moche culture existed between the 1st and the 8th century AD. The Chimú Empire flourished during the 15th century AD reaching a maximum extent of over 1000 kilometers in the northern and central coast of Peru.

The economy of the Chimú Empire was based on agriculture, but mostly on fishery Bones of sea animals, shells, and fishbones along with cotton fishing nets, copper hooks, and stone net-weights were found in great quantity at Chimú archaeological sites. The capital itself covered approximately 25 km2, and all the buildings, including the monumental palace complexes, were constructed with earthen adobe bricks. The walls of the palaces are covered with abundant decorations of otters, pelicans, fishes and human warriors. The site is currently on the UNESCO World Heritage Site. Chimú craftsmen produced flawless textiles, metal objects (copper, silver, and golden), famous wooden statues, and characteristic dark-grey fine vessels. The Chimú Empire was conquered by Incas around 1470 AD.

Poles in Peru in the 19th and 20th century

The question if the Chimu vessel could get to Poland as a result of the extensive Polish presence in Peru during the 19th and 20th remains unanswered.

The first Polish engineers came to Peru in the second half of the 19th century as students of French technical schools such as  École des ponts et chaussées or École centrale des arts et manufactures as specialists in topography, mining industry, architecture, cartography, civil and railway engineering. One of the pioneers was Ernest Malinowski who established the Polish School of Engineers, which had a major impact on the development of Peru in the second half of the 19th century. Ernest Malinowski became the national hero of Peru for a project modernizing military coast fortifications during the Chincha Islands War. Later, in 1870 he started the construction of the Trans-Andean Railway. One of the engineers working on this project was Władysław Kluger who also directed the excavations at the Precolumbian cemetery in Ancón (now one of the districts of Lima). He also traveled around Peru studying ancient ruins. During one of his expeditions, he visited also the ruins of Chan Chan. He gathered an impressive collection of artifactsfrom different Andean cultures, which was donated by him to the National Archaeological Museum in Cracow in 1876. Part of his collection was exhibited in Madrid during the 400th-anniversary of the Voyages of Cristopher Columbus.

Edward Habich is another important person who since the 1870s led numerous engineering projects in Peru. Moreover, in 1876 he contributed to the founding of the first technical school in Latin America Escuela Especial de Ingenieros de Construcciones Civiles y de Minas in Lima, which in 1943 was named after him: Edward Habich Universidad National de Ingeneria.

During the second half of the 19th-century zoologists, botanists, ornithologists, and geologists of Polish origin were conducting their studies in Peru. Moreover, Edward Habich and Ernest Malinowski were members of the Sociedad Geografica de Lima since 1888. One of the missions of this organization was the documentation and excavation of Precolumbian archaeological sites in Peru. Edward Habich was especially interested in Incan architecture due to his architectonic education.

Polish settlement efforts in Peru in the 20th century

After regaining independence in 1918, the Polish-American Colonisation Syndicate was founded. The main goal of this institution was the establishment of Polish settlements in Peru. In 1927, they obtained a license from the Peruvian government to settle in the valleys of the Ucayali, Tambo, and Urubamba rivers. In 1933, the mission led by Kazimierz Warchałowski was considered unprofitable by the Polish government and in the same year, the Polish-American Colonisation Syndicate lost its license from the Peruvian government and was dissolved.

Positivists, Naturalists, Travelers, But Not Settlers: Poles in Perú in the Nineteenth and Early Twentieth Centuries. Władsyław Kluger i jego kolekcja zabytków kultur peruwiańskich (Muzeum Archeologiczne w Krakowie) and books M. Moseley, The Incas and their ancestors: the archaeology of Peru.  and J. Szykulski Starożytne Peru.

This article may be freely reprinted with photographs with licences, with reference to the source